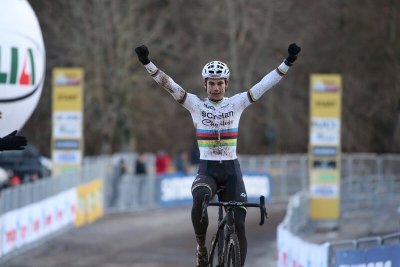 Although the teamwork of Suomy was used to winning World Championships in motorsport, now for them is a great feeling to capture in cycling the first jersey with the colors of the World Champion.

Wout Van Aert won and gave his first world title to Suomy, leading to victory the GUN WIND helmet on the terrible conditions of a hard frozen subsoil in Luxembourg.

An amazing race, where Wout struggled strongly with the Dutch guy, his competitor since ever. A battle head to head in front of a crowd of 30,000 people. The duo performed a series of laps on puddles of ice water and mud and these terrible weather conditions got exhausted first the riders and then their bikes. A bit of luck in the end for our rider, who was anyway the favorite. He gave full gas and complete a long solo ride to win his second consecutive World Title.

It’s not true that we did not expect this victory. Wout, being the World Champion in 2016, is in great conditions; In fact, after the race, as if by magic, here is going out from the hat the GUN WIND with the World Champion design, the world Champion colors and the Belgian flag.

A great victory that once again confirms the winning DNA of SUOMY.